Cloud network architectures deviate significantly from the architecture of the Internet infrastructure. These deviations are driven mostly by economics, simplicity, and scalability. This article will help you learn:

About old and new network architectures

Before there were networks, monolithic applications ran on a mainframe with hardwired I/O devices. As CPUs proliferated in separate enclosures, LANs like Banyan Vines grew up. Proprietary mismatch led to the OSI model. Next came the Web, which distributed processing to client devices. Now, we have the idea of generic switches and servers in cloud and bare-metal clusters. Servers have shifted from dedicated applications to being completely virtualised. 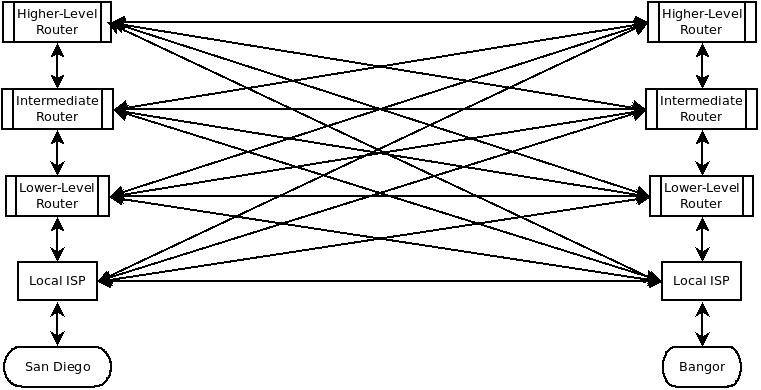 It’s heavy on network hardware; that is, the radio of switches to servers is (too) high. Switch-driven networks used hardware packet switching (merchant silicon) to serve proprietary network configurations. In theory, bridges needed no configuration, although congestion and mistaken identity led to the need for STP, per-VLAN trees, and IP address redundancy management techniques.

A cloud architecture simplifies these networks:

Cloud architecture is a simple spine-and-leaf network, built from cheap, identical switches connecting cheap, identical servers. Every switch has a path to every other switch, mitigating congestion. Any switch can route any traffic anywhere, and any server can do any job (at any time). This architecture moves the developer’s focus from metal to actual computing problems.

Problems with the AAG architecture

There are other issues usually cited, but these are most concrete.

An effective cloud architecture breaks routers and bridges into separate hardware and software, sometimes called “switch disaggregation”. A merchant-silicon chassis (the hardware) can be combined with someone else’s NOS (network operating system, the software) to produce more standard and cost-effective network switch-gear. In practice, few cloud providers actually create their own NOS, choosing instead to either integrate merchant silicon with a separately purchased NOS, or, more likely, to buy bundled units from switch providers that have broader integration experience.

Either way, the effect is to have switch-gear which is (1) less likely to be proprietary, and (2) easier to upgrade as the hardware advances. Switch disaggregation effectively commoditizes the switching elements, effectively eliminating them from network throughput calculations. In other words, the bridges and routers in a modern cloud network are essentially invisible, uninteresting, and inexpensive, which facilitates the cloud-network build-out model.

Regardless of your network vintage, packet routing is still the fundamental algorithm that gates throughput. If you’re familiar with routing, this section can be skipped. If you’re trying to level up your cloud networking knowledge, this section should help quite a bit.

Routing is fundamentally simple: you’re trying to get a packet from a source to a destination, using the destination IP address embedded in that packet. In practice, routing is more complicated. Most of the routers in a network path are not forwarding directly to the destination. Instead, they’re sending the packet to the next hop, that is, another, reachable router that is closer to the intended destination.

In the TCP/IP tutorial, we talked about telephone-line repeaters that refreshed the signal to keep it crystal clear over long runs of wire. The signals didn’t have to make it to the intended recipient, they just had to make it to the next repeater, which boosted the signal, cleaned up the noise, and sent the call on down the line to another repeater. Eventually the call would make it to the subscriber.

Routing works very much the same way: most of the routers in the loop understand how to find another router which is close to the intended destination. That “next hop” will take care of repackaging the packets and sending them further down the line. What matters in high-traffic cloud networks is not routing, per se, but how the packets are routed. The choice of routing protocols can make all the difference in whether or not your network lags. For this reason, we’re going to take a more extended look at routing.

One helpful tool for modern cloud networks is the concept of multicast routing. Stated simply, multicast routing allows one packet to be received by many servers, but only if those servers are interested in receiving it. Multicast receivers – which have to subscribe in order to receive the packets – support a much larger (and more flat) network. This layout more easily scales to the cloud architecture shown above. Multicasting is generally faster and more efficient for certain payloads; unlike broadcast packets, multicast packets are not examined by every NIC in the packet’s path.

For example, all IPv6 communications are multicast, so there’s no ARP. Instead, a process called neighbour discovery (NDP) is used. But IPv4 networks can also handle multicast transactions. Both IPv4 and IPv6 protocols support multicast address blocks, which enable multicasting.

A multicasting server sends one packet, and the network handles replication and addressing (multiplexing) of the packets to the subscribed servers. Multicast is a one-way protocol: any responses have to be sent by other protocols. For larger server farms, multicast is a good way to handle things like a software update or a database refresh. Two special protocols handle subscriptions: IGMP, used by individual IPv4 receivers, and PIM, which is used by L3 devices (like routers) to manage multicast “trees” across a network or subnet.