MAAS is built to manage machines, including the operating systems on those machines. Enlistment and commissioning are features that make it easier to start managing a machine – as long as that machine has been configured to netboot. Enlistment enables users to simply connect a machine, configure the firmware properly, and power it on so that MAAS can find it and add it.

Enlistment happens when MAAS starts; it reaches out on connected subnets to locate any nodes – that is, devices and machines – that reside on those subnets. MAAS finds a machine that’s configured to netboot (e.g., via PXE), boots that machine into Ubuntu, and then sends cloud-init user data which runs standard (i.e., built-in) commissioning scripts. The machine actually adds itself over the MAAS API, and then requests permission to send commissioning data.

Since MAAS doesn’t know whether you might intend to actually include these discovered machines in your cloud configuration, it won’t automatically take them over, but it will read them to get an idea how they’re set up. MAAS then presents these machines to you with a MAAS state of “New.” This allows you to examine them and decide whether or not you want MAAS to manage them.

When you configure a machine to netboot – and turn it on while connected to the network – MAAS will enlist it, giving it a status of “New.” You can also add a machine manually). In either case, the next step is commissioning, which boots the machine into an ephemeral Ubuntu kernel so that resource information can be gathered. You can also run custom commissioning scripts to meet your specific needs.

When MAAS commissions a machine, the following sequence of events takes place:

The commissioning scripts will talk to the region API server to ensure that everything is in order and that eventual deployment will succeed.

MAAS chooses the latest Ubuntu LTS release as the default image for commissioning. If desired, you can select a different image in the “Settings” page of the web UI, by selecting the “General” tab and then scrolling down to the Commissioning section.

To commission, on the “Machines” page, select a machine and choose “Commission” under the “Take action” drop-down menu.

You have the option of selecting some extra parameters (checkboxes) and performing hardware tests.

While commissioning, the machine status will change to reflect this state (Commissioning). MAAS discovers the machine’s network topology. MAAS then prompts a machine network interface to connect to the fabric, VLAN, and subnet combination for configuration. Usually, MAAS assigns a static IP address out of the reserved IP range for the subnet (“Auto assign” mode). The next section details several assignment modes.

Once commissioned, a machine’s status will change to Ready, and an extra tab for the machine called “Commissioning” will become available. This tab contains the results of the scripts executed during the commissioning process.

Once commissioned, you may consider creating or applying a tag to this machine. The next step is deployment.

About commissioning NUMA and SR-IOV nodes

If you are using the NUMA architecture, MAAS versions 2.7 and higher guarantee that machines are assigned to a single NUMA node that contains all the machine’s resources. Node boundaries are critical, especially in vNUMA situations. Splitting nodes can create unnecessary latency. You want the NUMA node boundaries to match VM boundaries if at all possible.

You must recommission NUMA/SR-IOV machines that were previously commissioned under version 2.6 or earlier. 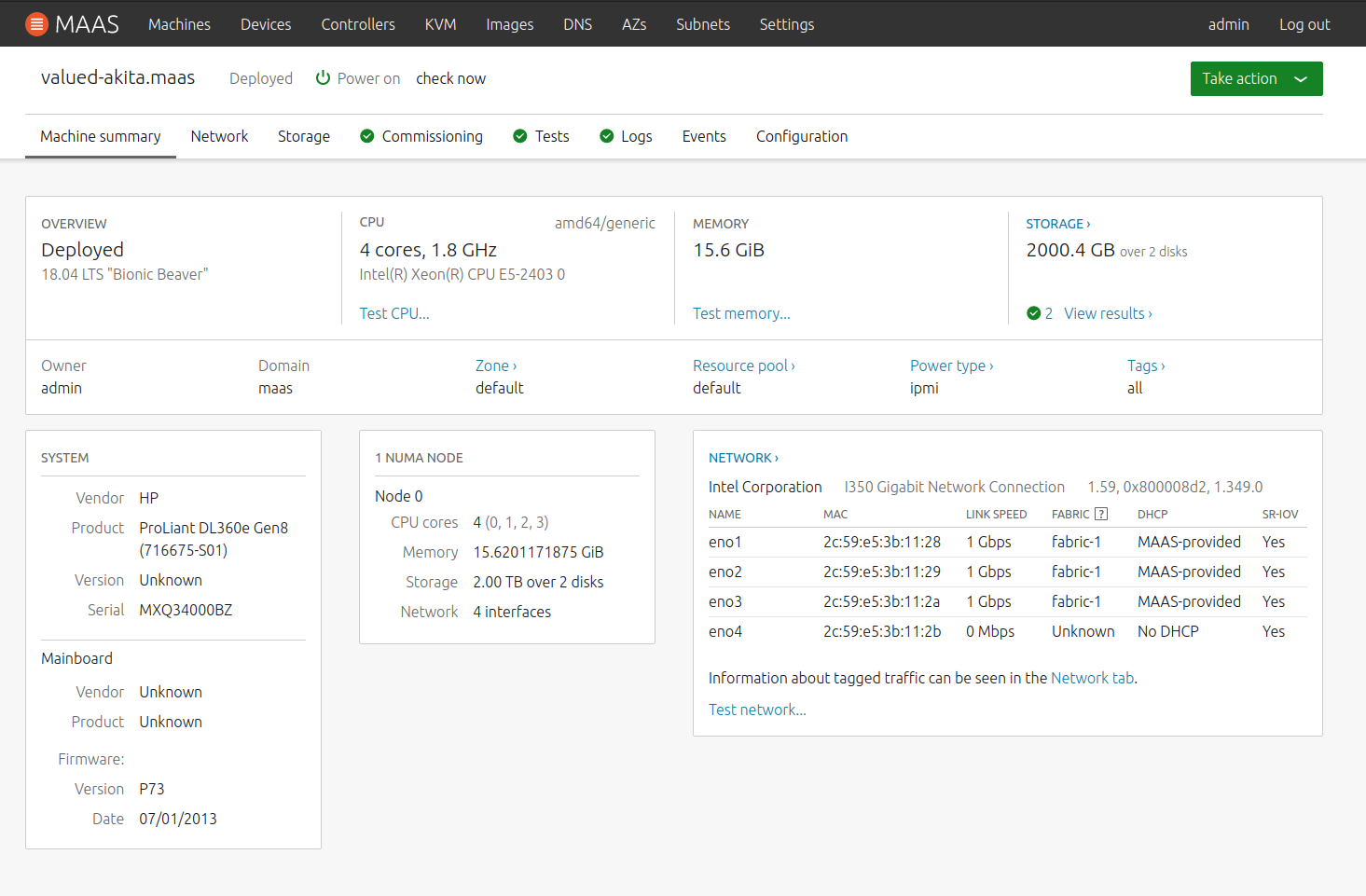 When using these nodes, you can specify a node index for interfaces and physical block devices. MAAS will display the NUMA node index and details, depending upon your configuration, to include the count of NUMA nodes, number of CPU cores, memory, NICs, and node spaces for bonds and block devices. You can also filter machines by CPU cores, memory, subnet, VLAN, fabric, space, storage, and RAID, among others.

Commissioning runs the same dozen or so scripts as enlistment, gathering all the same information, but with these seven caveats:

In both enlistment and commissioning, MAAS uses either the MAC address or the UUID to identify machines. Currently, because some machine types encountered by MAAS do not use unique MAC addresses, we are trending toward using the UUID.

Once commissioned, you can configure the machine’s network interface(s). Specifically, when a machine’s status is either “Ready” or “Broken”, interfaces can be added/removed, attached to a fabric and linked to a subnet, and provided an IP assignment mode. Tags can also be assigned to specific network interfaces.

About bond and bridge interfaces

A bond interface is used to aggregate two or more physical interfaces into a single logical interface. Combining multiple network connections in parallel can increase network throughput beyond what a single NIC will allow. It also provides some redundancy in case one of the NICs should fail. More information about the theory behind bonded NICs is found in the relevant IEEE standard.

A network bridge may be useful if you intend to put virtual machines or containers on the machine. You can create a bridge by selecting an interface and clicking the now-active “Create bridge” button. A form will appear that allows you to configure a MAC address, STP, and an appropriate tag.

From a machine’s “Interfaces” page, click the menu icon for the interface to be edited and select “Edit Physical” from the resulting menu:

The following window will appear: 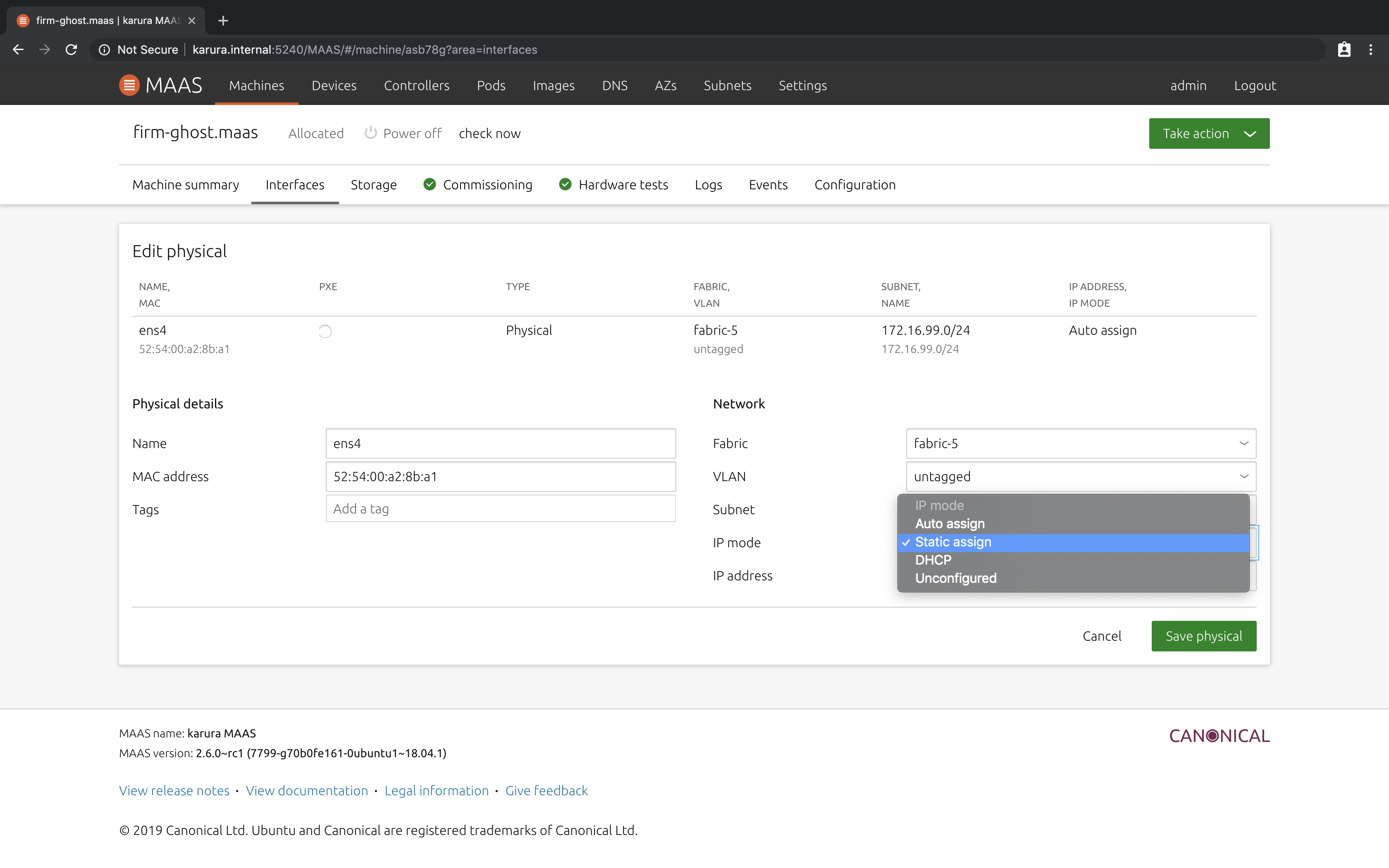 Four modes determine how a subnet address is assigned when MAAS deploys the machine. You can select one of these modes by clicking on the “IP mode” drop-down menu.

Press the “Save” button to apply the changes.

See Concepts and terms for the definitions of reserved range types.

How to create a bond interface

A bond is created by selecting more than one interface and clicking the now-active “Create bond” button:

After clicking the “Create bond” button, the bond configuration pane will appear.

From the bond configuration pane, you can rename the bond, select a bond mode (see below), assign a MAC address to the aggregate device and attach one or more tags.

The interfaces aggregated into the bond interface are listed below the “Tags” field. Use the “Primary” column to select the interface to act as the primary device. 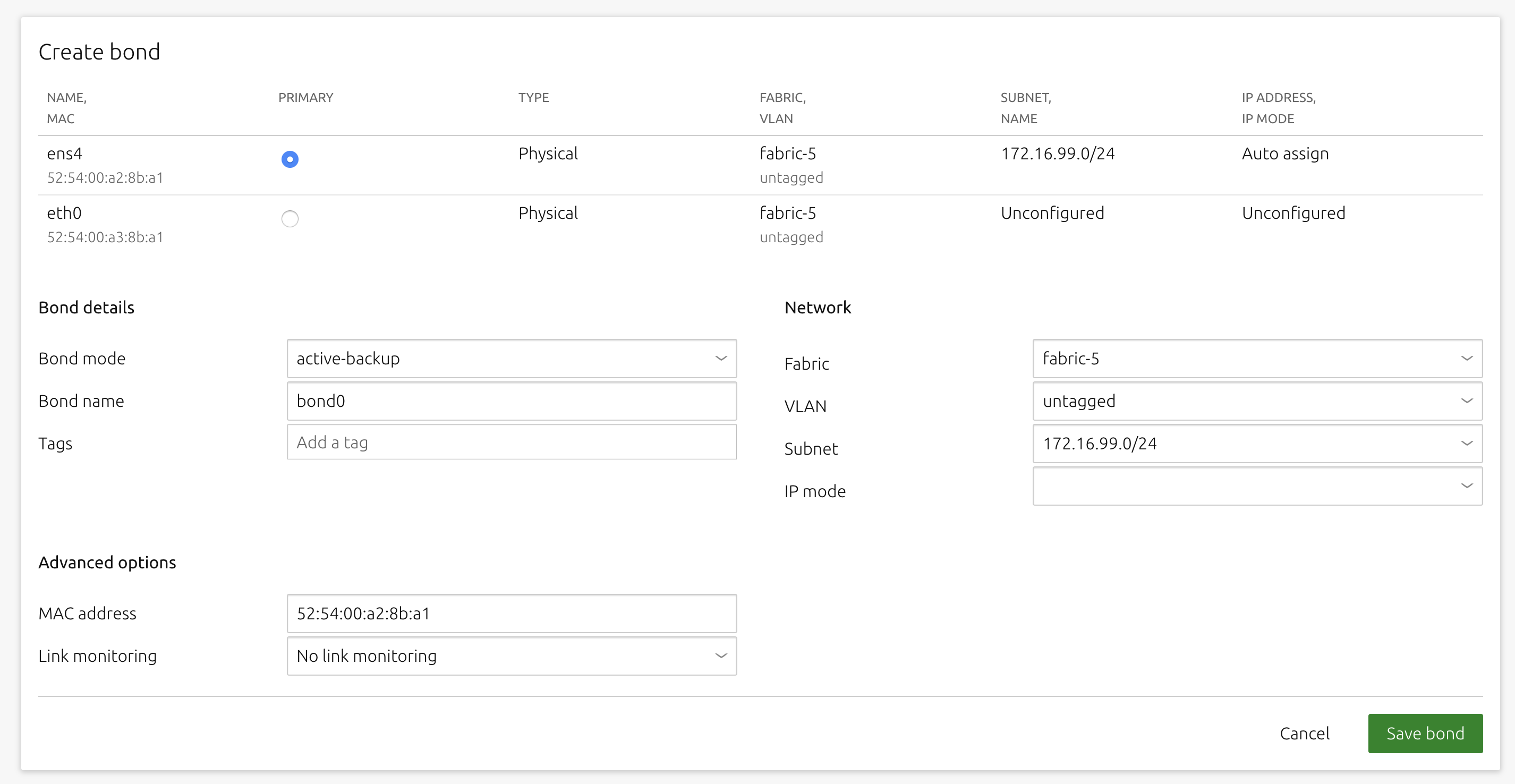 You can select from the following bonding modes on the “Bond mode” drop-down menu:

Press the “Save” button when you’re done.

How to create a bridge interface

Press the “Save” button when you’re done.

How to delete an interface

An interface can only be deleted via the MAAS CLI.

The “delete” command can be used to delete a bridge interface, a bond interface or a physical interface:

The following is output after the successful deletion of an interface:

Note that while the label is presented, there is no machine-readable output expected after the successful execution of the delete command.

How to assign a network interface to a fabric

A network interface may be assigned to a fabric with the MAAS CLI only.

This task is made easier with the aid of the jq utility. It filters the maas command (JSON formatted) output and prints it in the desired way, which allows you to view and compare data quickly. Go ahead and install it:

In summary, MAAS assigns an interface to a fabric by assigning it to a VLAN. First, we need to gather various bits of data.

You can only edit an interface when the corresponding machine has a status of ‘Ready’. This state is numerically denoted by the integer ‘4’.

List some information for all interfaces on the machine in question (identified by its system id ‘dfgnnd’):

This example will show how to move interface ‘8’ (on machine ‘dfgnnd’) from ‘fabric-1’ to ‘fabric-0’. Based on the gathered information, this will consist of changing the interface’s VLAN from ‘5002’ to ‘5001’:

Verify the operation by relisting information for the machine’s interface:

The output shows that the interface is now on fabric-0:

How to discover interface identifiers

Interface identifiers can only be discovered via the MAAS CLI.

The MAAS CLI uses a numeric interface identifier for many interface operations. Use the following command to retrieve the identifier(s):

Look for either id or the number at the end of an interface’s resource URI, such as 15 in the following example output:

How to create a VLAN interface

VLAN interfaces can only be created via the MAAS CLI.

To create a VLAN interface, use the following syntax:

The above command generates the following output:

Be aware that the $VLAN_ID parameter does not indicate a VLAN ID that corresponds to the VLAN tag. You must first create the VLAN and then associate it with the interface:

OUTPUT_VLAN_ID corresponds to the id value output when MAAS created the VLAN.

The following example contains values that correspond to the output above:

The above command generates the following output:

How to delete a VLAN interface

VLAN interfaces can only be deleted via the MAAS CLI.

The following command outlines the syntax required to delete a VLAN interface from the command line:

Using the values from previous examples, you executed this step as follows: