Time to try MAAS! We wanted to make it easier to go hands on with MAAS, so we created this tutorial to enable people to do that, right on their own PC or laptop. Below, we’ll explain a bit about how MAAS works and then dive straight into it.

Hang in there, because you’ll be up and running in no time, installing operating systems with ease and without breaking a sweat!

Installing MAAS itself is easy, but building an environment to play with it is more involved. MAAS works by detecting servers that attempt to boot via a network (called PXE booting). This means that MAAS needs to be on the same network as the servers.

Having MAAS on the same network as the servers can be problematic at home or the office, because MAAS also provides a DHCP server and it can (will) create issues if target servers and MAAS try to interact on your usual network.

One way to try MAAS is to have a separate network, such as a simple switch+router, with several servers attached. One of these servers runs MAAS, and the others are target servers that MAAS can provision. Such a setup might look like this:

Multipass is a tool from Canonical that can help you easily create VMs (Virtual Machines). This tutorial uses Multipass to create a self-contained Virtual Machine that includes MAAS and an LXD host right on your desktop or laptop.

Inside the VM, Multipass will use LXD and Linux configuration to build a virtual private switch and router, and provide a way to create what are called “nested VMs”, or virtual machines inside the virtual machine made by Multipass. These nested VMs will represent servers that MAAS can provision.

When we’re finished, you’ll be able to log in to the MAAS server running inside the VM on your computer, compose nested VMs using LXD, and then commission and deploy them. It will then be simple to spin up a quick MAAS environment without needing to build a complete real environment.

The memory and disk space is required because we will later be launching nested VMs inside our new environment using MAAS and LXD.

Don’t have the right machine?

If you don’t have the right machine or OS to try the tutorial, don’t worry - we have created a quick video of ourselves running through the tutorial which you can watch here.

During this tutorial, we’re going to be entering quite a few commands in a terminal. Open a terminal of your choice, and let’s get started.

Check whether multipass installed correctly and is functioning by launching an Ubuntu guest and running the following commands:

You should see the following output: 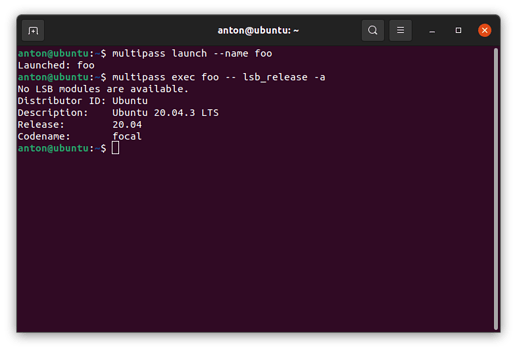 Delete the test VM, and purge it:

4. Check whether virtualisation is working

We now need to check whether virtualisation is working correctly. This is a relatively simple process. In your terminal, run:

You should see the following output:

Assuming your machine supports hardware virtualisation, we are ready to move on and launch MAAS.

Note
The tutorial will not work unless you have ensured virtualisation support is enabled.
The first place to check if you don’t see the expected output is your BIOS - consult your motherboard or laptop manufacturer documentation if you are uncertain.

Launching the MAAS and LXD VM is as simple as the test VM was to launch, except that this time you will pass a cloud-init config file, and a few other parameters for CPU cores, memory, and disk space.

The below command looks a bit long, so let’s break it down:

Feel free to check the contents of the cloud-init config file before running this. Copy the entire command below (both lines) and run it:

Wait for multipass to finish launching the MAAS and LXD VM. When the command completes, verify that it is running:

You should see the following: 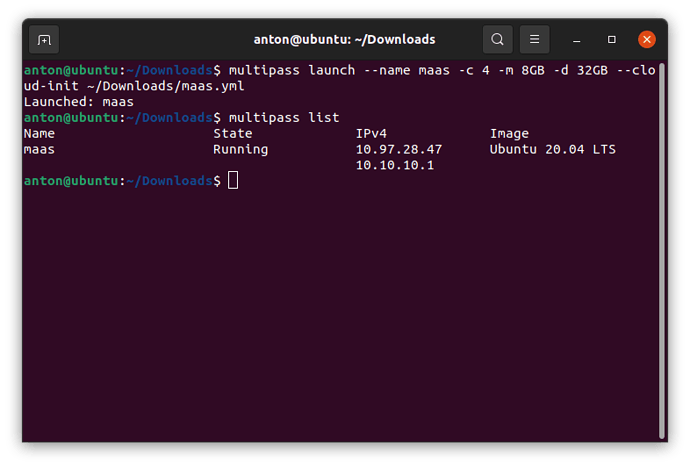 Here you can see two IP addresses. One belongs to the internal network (10.10.10.1) for MAAS and LXD guest VMs to communicate. You can use the other to connect to MAAS from your computer.

Now that MAAS is running, you need to login and finalise the setup for MAAS by configuring DNS and verifying the installation.

From a browser on your computer, go to:

Don’t worry that it’s not HTTPS - you’re accessing this on your own PC (nobody can eavesdrop). 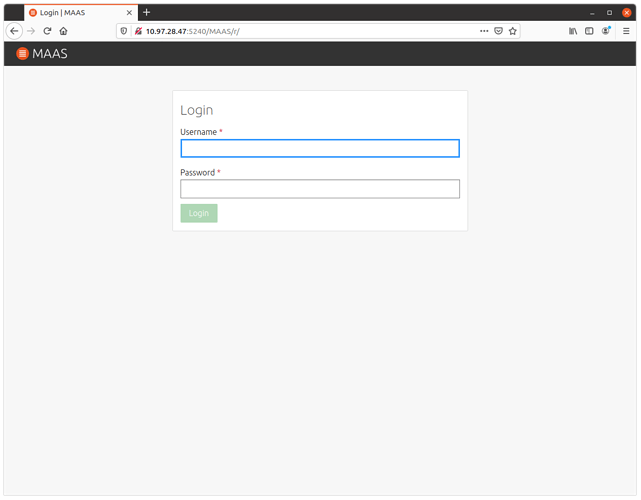 Log in with the username admin and password admin, and you should be greeted with the welcome screen. DNS in the DNS forwarder field should be prepopulated with 8.8.8.8, but you can change it if you like to another DNS provider: 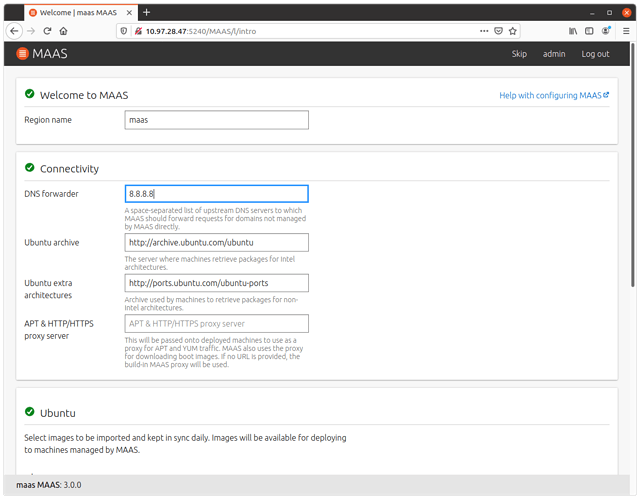 Note
During setup, you might notice the following text displayed as a banner: “Boot image import process not started … Visit the boot images page to start the import.” Don’t worry, this will go away once MAAS has downloaded what it needs. Don’t click on the link in the banner. 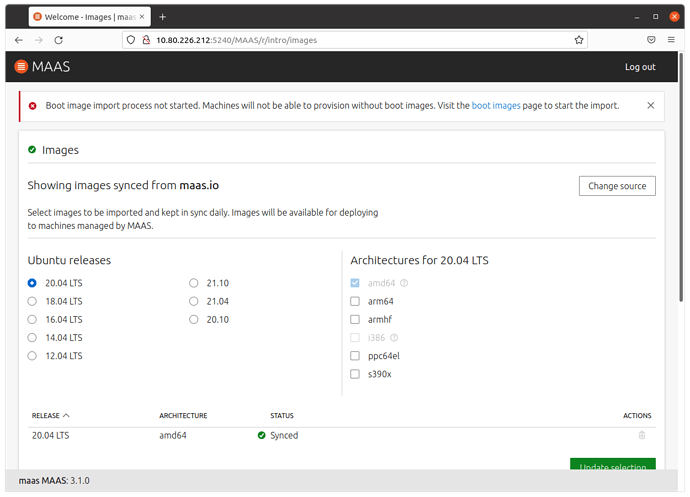 You should now be at the ssh key setup screen. This is a very important part of using MAAS, because MAAS automatically puts SSH public keys on machines when deploying them, enabling you to gain access to them. Normally you’d have to generate a key-pair or specify your Github or Launchpad keys. But this time around, we’ve taken care of this for you already - there is a key-pair ready and installed inside the VM.

This means you can skip adding a ssh key-pair - just click Skip user setup, and then when it asks if you are sure, click the green Skip user setup button: 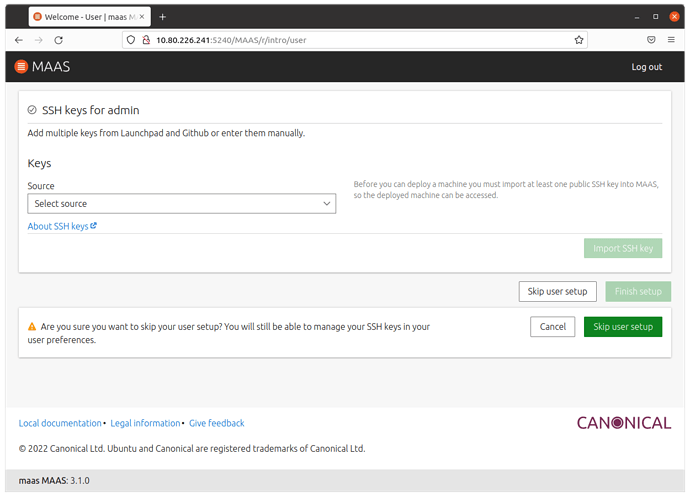 7. Verify and explore your MAAS and LXD installation

Let’s take a look around our new setup. MAAS might still be downloading some Ubuntu images, getting itself ready to use them to deploy. By default, this is around 1 GB, so depending on your network speed it might take a little while.

First, click the KVM tab up top. You should see a LXD server already set up for you, similar to the following: 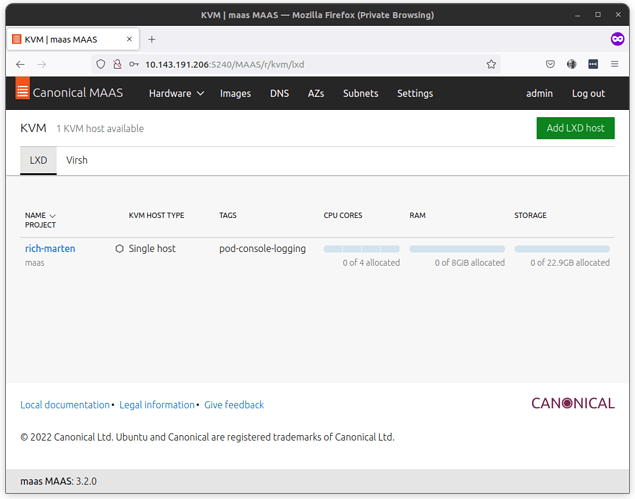 Second, click the Controllers tab up top. You should see that you have a controller of type rack and region controller, and the status should show a green tick: 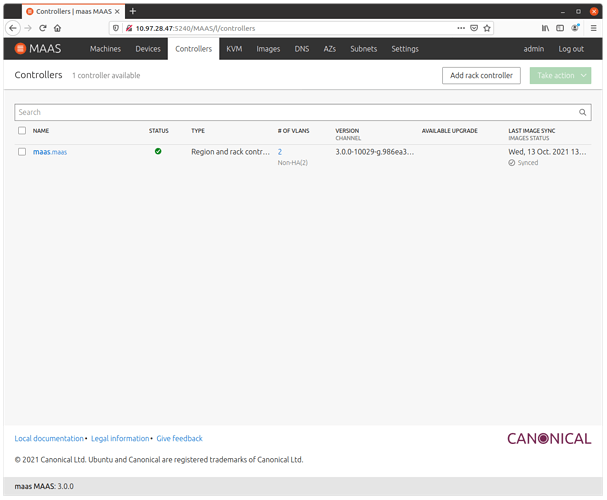 Now, click the Images tab. If MAAS has finished syncing the Ubuntu images mentioned above, then you should see that the status says “Synced”: 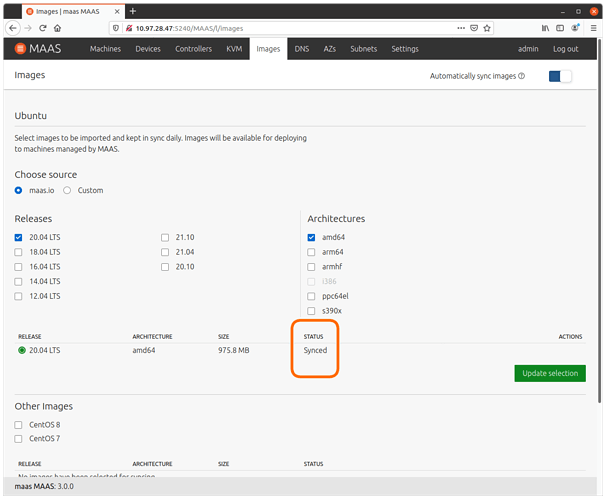 If it’s not synced yet, wait for a few minutes and refresh the page.

Once the images are synced, it’s time for some fun – using MAAS to create our first VM guest with LXD!

Click the KVM tab up top again, and click the MAAS link for the KVM host in the “NAME” column, which should bring you here: 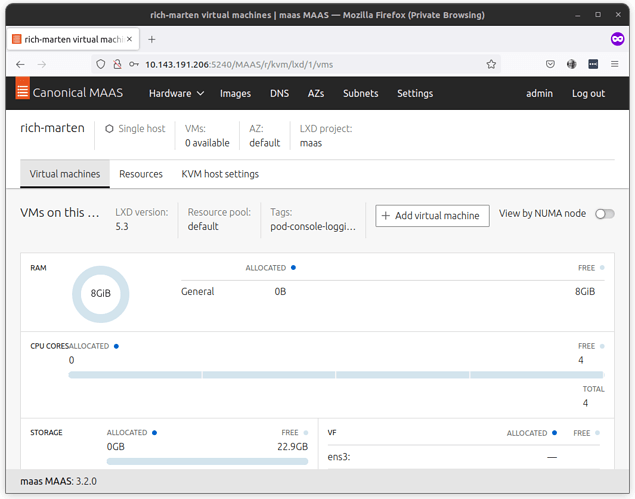 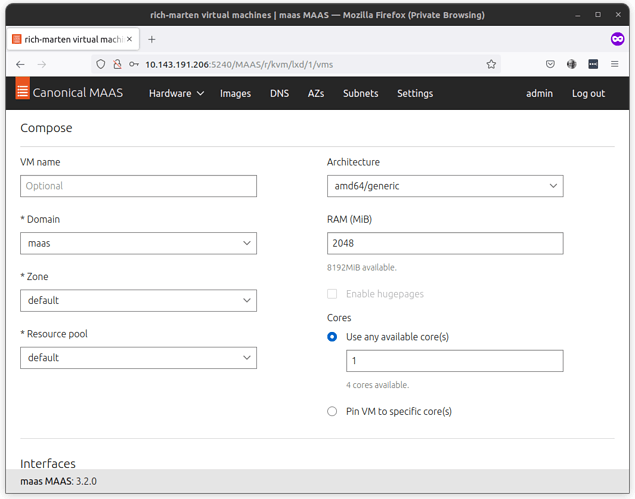 Now fill in the details. For an Ubuntu guest, we need to set RAM, CPU and disk to their recommended values:

When you’re done, scroll down and click the green Compose machine button. Scroll back up and you should see: 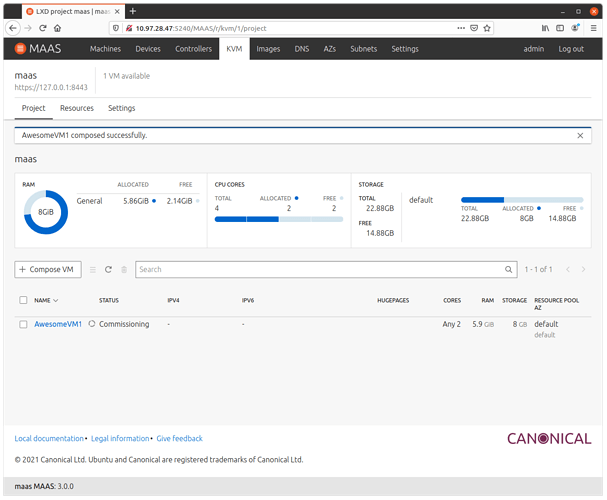 9. Commissioning and deploying Ubuntu to the VM guest

Click the Machines tab up top and you should see your new VM host in the list with a status of Commissioning. It should look like this: 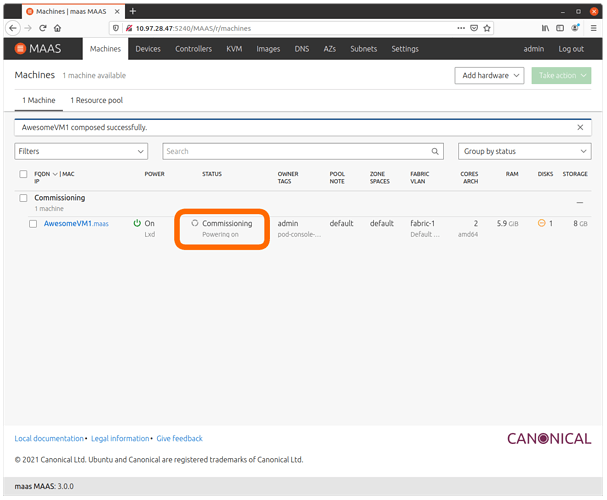 Click the machine and you should see more details: 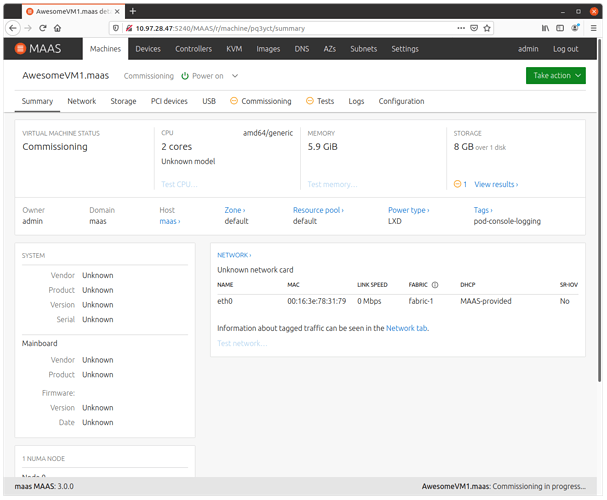 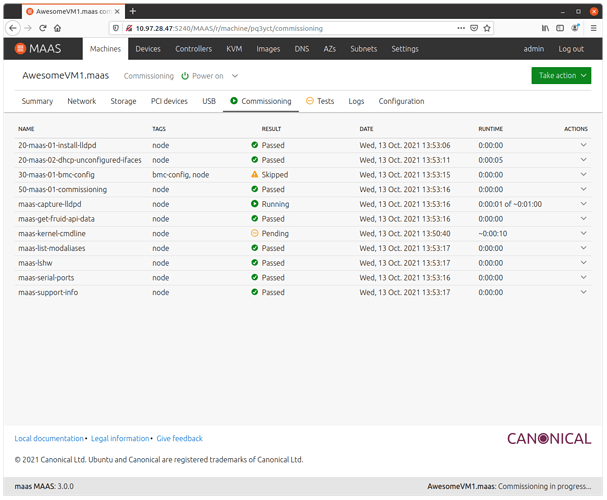 When it’s done, the machine will move into a ready state, and can be viewed from the Machines tab or from within the machine view itself: 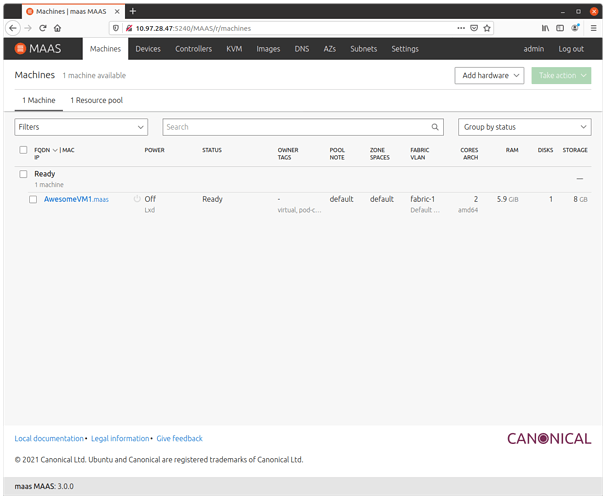 It’s now time to deploy Ubuntu to the machine! From the Machines tab, tick the AwesomeVM1 tickbox. Then simply click the green Take action button in the top right and click deploy: 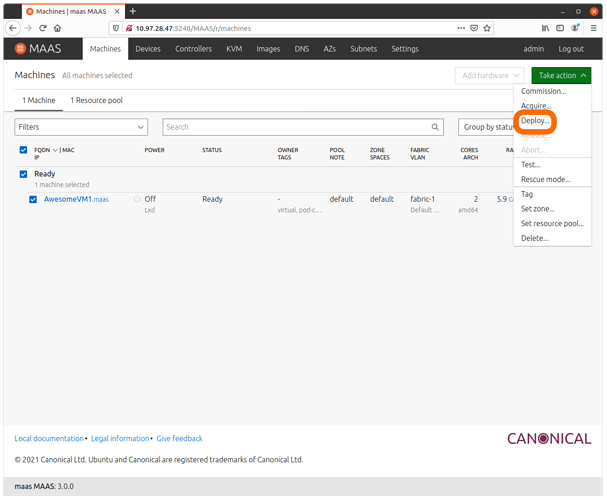 After clicking deploy, you will see the following screen, click the green Start deployment for machine button: 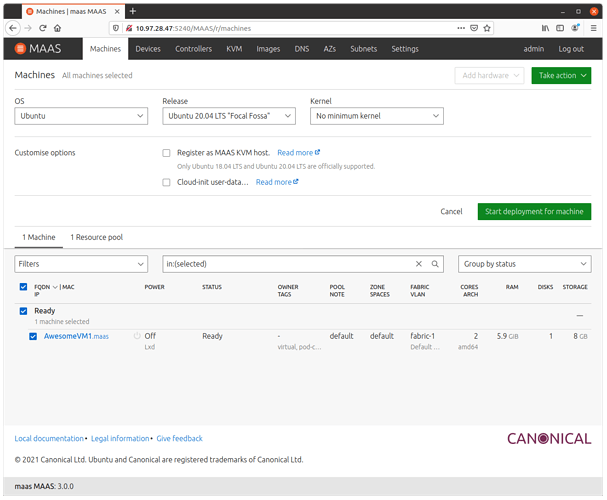 You should see that MAAS starts deploying Ubuntu to the machine. It will take a while to deploy Ubuntu depending on the speed of your computer. 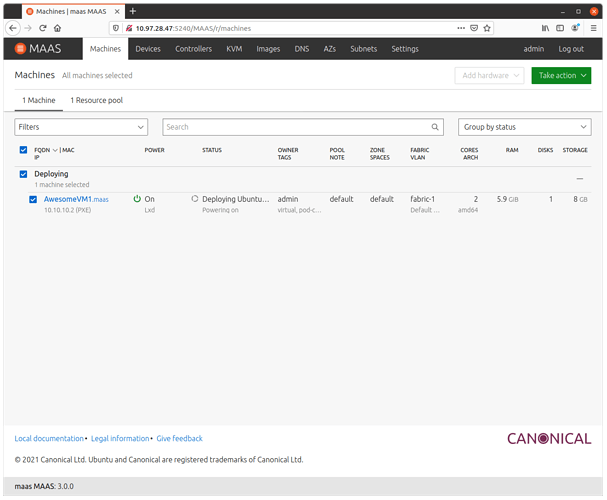 When it’s done, assuming everything went well, you should now see the machine status changes to reflect the Ubuntu version installed: 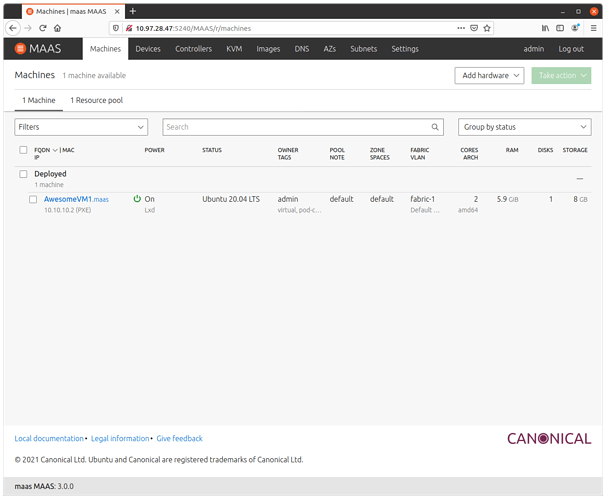 Great work - the machine is now ready for us to log in and verify that it is up and running.

10. Verify the VM guest is up and running

Go back to the terminal you started earlier, which should still be logged in to the multipass shell on your MAAS VM:

You should see ping responses: 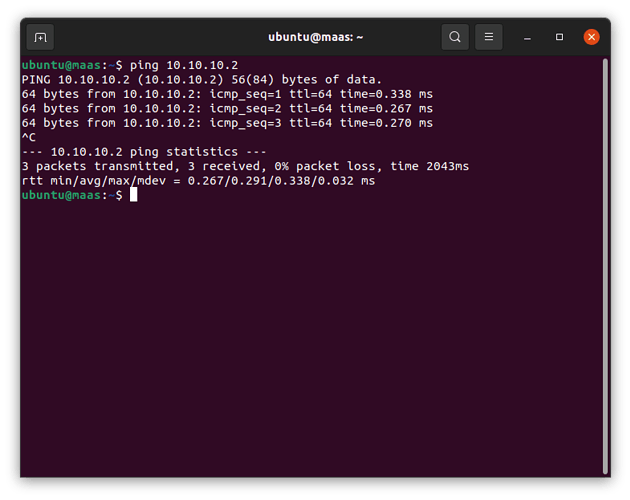 SSH into the VM guest by running the following command. Accept the authenticity notice:

You should see that you are now in a shell on the AwesomeVM1 machine: 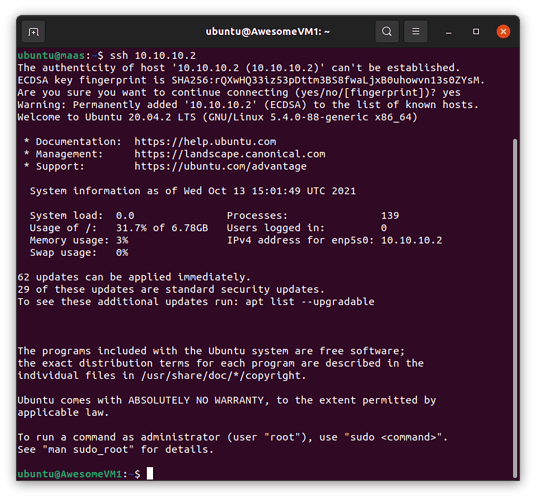 Try pinging something on the internet from the machine:

Again, you should see ping responses:

That’s it! We’ve successfully created and deployed a VM inside our multipass VM using MAAS and LXD.

Fantastic work! We now have our own MAAS and LXD environment!

Play around creating some more VMs, but be aware of your CPU, memory, and storage limitations. If you like, you can experiment with deleting machines from the Machines tab and recreating VMs in the KVM tab.

If you want to get a bit more advanced, you can try editing the maas.yml file and altering how much storage LXD assigns. You can also change the multipass command to start your MAAS VM, adding more CPU cores, memory and disk. Note that you need to ensure that the disk space you assign using multipass is large enough to accommodate both MAAS and the LXD storage.

To learn more about bare metal provisioning and MAAS, try our ebook.

Learn more about MAAS at https://maas.io. Perhaps you would like to build a real physical environment for MAAS and LXD?

Was this tutorial useful?

Thank you for your feedback.