MAAS provides supported images for stable Ubuntu releases, and for CentOS 7 and CentOS 8.0 releases. Other images can be customised for use with MAAS.

This article will help you learn:

What is a MAAS image?

MAAS images are more than just the operating system kernel. In fact, a usable MAAS image consists of at least four things:

If you glance at the squashfs.manifest, you’ll see something like this:

This snippet gives you a basic idea of the kinds of things that have to be loaded onto a drive in order for the system to function independently.

How images get deployed onto a machine

Here’s a conceptual view of the way that images get deployed to create a running MAAS machine: 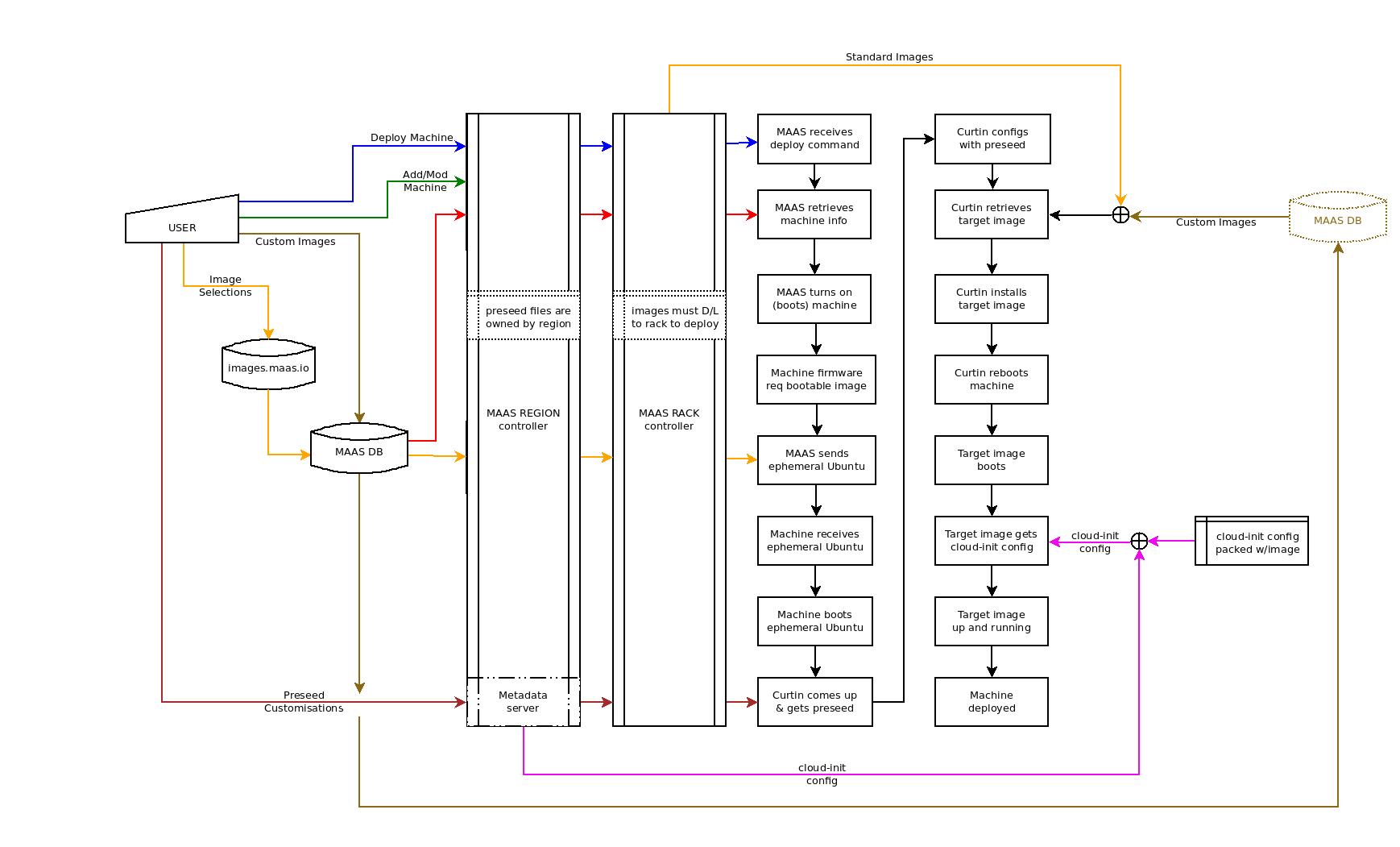 This is a good place to explain how images work, including the nuances of cloud-init and curtin configurations. Let’s take it from the top.

Before a machine can be deployed, it must be added to MAAS, commissioned, and allocated. Machines can be added to MAAS either by enlistment or by direct user action. This machine must then be commissioned, which establishes the configuration and resources of the machine. Finally, that machine must be allocated, that is, assigned to the control of one and only one user, so that conflicting commands to the same machine are not possible. This aggregate step is represented by the green lines in the above diagram.

When MAAS receives the “deploy” command from the user (blue lines), it must first retrieve (from the MAAS DB) the machine info that was gathered about the machine during commissioning (red lines). MAAS then boots the machine and waits for the machine’s firmware to request a bootable “ephemeral” OS. This ephemeral OS must be one of the images supplied by the MAAS simplestreams and cannot be a custom OS image.

At the point that MAAS must send the ephemeral OS to the machine, MAAS needs to have this OS downloaded to the rack controller, based on earlier selections made by the user (yellow lines). Assuming that the a suitable simplestreams image is available, MAAS can send it to the machine. This ephemeral OS is not deployed, but it is used to download and deploy the image you’ve chosen for the machine.

When the ephemeral OS boots, it immediately spawns curtin. Curtin’s deployment of the target image can be customised with pre-seeds, shown by the brown lines in the diagram. These pre-seeds control things which are difficult to change once the target OS has been installed (such as partitioning]. Things which can be customized after the target image is running are generally configured with cloud-init, represented by the pink lines.

Once cloud-init has finished, the machine is deployed, that is, up and running, ready to perform whatever functions have been assigned to it.

Key takeaways from this flowchart

The flowchart above is a bit complicated, but there are few key takeaways you should remember:

About boot sources and why they matter

A region controller downloads its images from a boot source. The main characteristics of a boot source are location (URL) and an associated GPG public keyring.

MAAS stores images in the region controller’s database, from where the rack controller proxies them to the individual machines. It’s important to note that for ESXi images, network configuration includes only these five parameters:

Bonds are mapped to NIC teaming in only three ways:

MAAS comes configured with a boot source that should suffice for most users:

The above URL points to the ‘stable’ stream (for the v3 format). See Local image mirror for some explanation regarding the availability of other streams.

Although the backend supports multiple boot sources, MAAS itself uses a single source. If multiple sources are detected, the web UI will print a warning and will be unable to manage images.