How to protect your secrets

As a MAAS administrator, you do not want secrets associated with a MAAS instance to be stored in the database, since it often doesn’t comply with security regulations. Examples of the MAAS settings which contain secrets are the OMAPI key and the RPC secret.

Other examples of such secrets are:

Beginning with version 3.3, MAAS secrets should instead be stored in HashiCorp Vault↗.

Ideally, you should consult the Vault documentation↗, but for convenience, we will provide a brief summary here.

Vault uses identity to protect secrets and encryption keys. The core component is the kv secrets engine, which uses key-value pairs to store arbitrary secrets within an encrypted storage extent managed by Vault. It’s similar to the full-disk-encryption tools that you’d use to protect your hard drive, but limited to a specific path assigned to the secrets engine(s).

If you’re interested, you can read more about secrets engines↗ at your leisure.

Vault protects the secrets engine with a sort of upscale chroot jail, called a barrier view↗. This barrier view consists of a folder, named to a randomly-generated UUID, which forms the abolute root directory for that engine. Secrets engines cannot, for example, cd .. above their UUID folder, which becomes an effective barrier for what that engine can view.

Beginning with version 3.3, MAAS secrets can be stored in HashiCorp Vault↗. To use Vault to protect your secrets, please upgrade to MAAS 3.3.

Likewise, you want to grant fine-grained access-controls to different users, based on assigned roles. Working in concert with RBAC and Candid, MAAS can restrict user access and actions based on four roles:

MAAS controls access with the help of RBAC (Role-Based Access Control), Candid (Canonical Identity Manager), and an identity service of your choice, such as SSO (Single Sign-On). From this point on, we’ll refer to this solution as MAAS/RBAC, even though it uses more than two tools. You can design and deploy a carefully-controlled MAAS environment using MAAS/RBAC.

MAAS alone can achieve this, to some degree, by allowing users to allocate machines, but this approach has some drawbacks:

With MAAS/RBAC, an operator can act as administrator for one resource pool, without the ability to manipulate someone else’s machines. Users can only operate within the confines of their resource pool, and auditors can review actions without making any changes.

How resource pools are integrated into MAAS/RBAC

Resource pools are just a way of grouping machines. Any given machine can be assigned to exactly one resource pool. If you control access to resource pools, and you assign roles properly, you can effectively control user access.

Note that just using resource pools to hide machines is a flawed access control approach, known as “security by obscurity.” What users don’t know will hurt you when the users figure it out. More often than not, users figure these things out entirely by accident, and hurt you unintentionally while trying to do the right thing.

Consequently, there must also be some means of active authorisation that allows access to a resource pool. That authorisation must be based on user identity. There must be some way of controlling what the user can do with that resource pool. In the parlance of standard security model, “what the user can do” would be called “privilege”, but for the purposes of MAAS, we simply call them “permissions.”

SSO permits users to log in once to access many network services. SSO centralises authentication (via Kerberos), account management (via LDAP), resource-sharing (via pam_mount), and limited authorisation through group memberships in LDAP, coupled with file system permissions.

RBAC (Role-based access control) does not authenticate users or verify their identity; that function is assigned to the identity service you choose. RBAC does receive an identity token or “macaroon” (via Candid) that RBAC uses to assign user roles. MAAS uses these roles, in turn, to control user access and actions.

How Candid fits into the picture

Direct authentication involves a user entering something unique in response to a challenge, in order to gain access. “Something unique” means “something you know, something you have, or something you are”, e.g., a password, a hardware key, or a fingerprint, respectively. Authentication can be automated with private/public key exchanges, protected with a password on the first exchange. Adding another access point (another trusted client) usually means providing a public key, setting a password, or registering some biometric data. Direct authentication works well when there are a limited number of clients and not a lot of user turnover.

Candid manages authenticated users via special access tokens (macaroons)↗ that confirm user identity. Unlike standard access tokens, macaroons can be verified independently, in a standard way, so they reduce the network traffic and delays of repeatedly querying the identity server. Traditional access tokens must be short-lived; macaroons are valid for much longer and they can be refreshed easily. Macaroons can also be bound to TLS certificates. And macaroons can be used by multiple clients and services with no loss of security.

Candid can do the following things:

Candid can use certificates and agents, if desired. You specify the identity provider by URL when instantiating the program.

When a user tries to log into a MAAS which is working with RBAC, MAAS redirects that login to the RBAC server. RBAC, in turn, requests authentication via Candid, which then consults the specified identity server (at the URL provided on startup). If the user is authenticated, Candid constructs a macaroon, which is then passed to RBAC and on to MAAS. This macaroon serves as the user’s authentication token until it expires.

RBAC uses a database to associate a given role with a properly-authenticated user identity. With RBAC, permissions are associated with roles, not individual users. Within a given resource pool, the role assigned to a properly authenticated user controls what they can and cannot do within that pool.

In the parlance of RBAC, MAAS would be a service, while each resource pool would be considered a separate scope. RBAC/MAAS also recognises scopes that are not tied to machines, including:

Note that it is possible for a given user to be an operator for one resource pool, a user for another, and an auditor for still another, but have no ability to change system settings or manipulate images. Nothing about RBAC prohibits this arrangement.

Here is a thumbnail sketch of the permissions model:

Relationships between roles, resource pools, and users is maintained by RBAC as a source of truth. MAAS mediates access to resource pools, based on user roles, using information obtained from RBAC.

The following diagram will give you a graphical view of how MAAS, RBAC, Candid, and an identity provider work together to control access to MAAS resources: 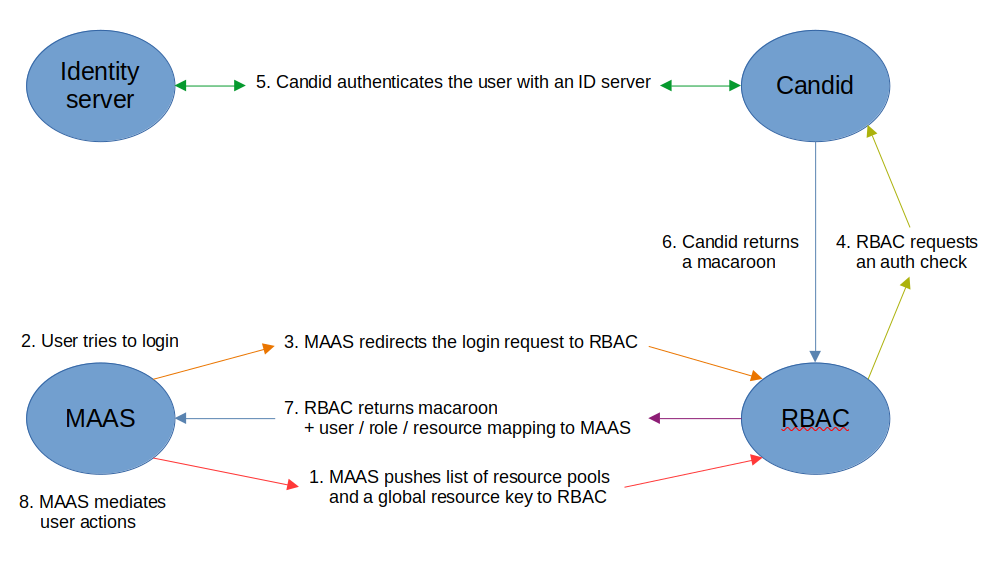 The step-by-step walk-through of the MAAS/RBAC relationship goes like this:

Note that RBAC does not adjudicate individual permissions against resource pools. RBAC only sends MAAS the combination of users, roles, and related resource pools to MAAS when requested. The MAAS code has a built-in understanding of the four roles (user, administrator, operator, and auditor) and what those roles can and cannot do with a given item.

The most important thing to understand about MAAS RBAC roles is that restricted users cannot see or interact with machines in resource pools that aren’t permitted for them. This is more than just “security by obscurity,” because even if a user knows the name or system ID of a machine in a non-permitted resource pool, that user can’t access it. Removing non-permitted machines from view, though, prevents confusion about what the user can and can’t do.

Here is a quick breakdown of how the four roles experience MAAS:

MAAS makes no assumptions about how these roles might be used in the day-to-day operation of your MAAS instance. The capabilities listed above form the complete set of what these roles can do.

Last updated a month ago.